The Nile
« Egypt is a gift from the nile »
Herodote
PrivateNile
Discover the history of Egypt on the water
"We journey up the storied Nile;
The timeless water seems to smile;
The slow and swarthy boatman sings;
The dahabëah spreads her wings;
We catch the breeze and sail away,
Along the dawning of the day,
Along the East, wherein the morn
Of life and truth was gladly born.

We sail along the past, and see
Great Thebes with Karnak at her knee.
To Isis and Osiris rise
The prayers and smoke of sacrifice.
'Mid rites of priests and pomp of kings
Again the seated Memnon sings.
We watch the palms along the shore,
And dream of what is here no more."

The Nile has two major tributaries, the White Nile and the Blue Nile, which meet just North of Khartoum.

The White Nile flows north through Tanzania, Lake Victoria, Uganda and South Sudan. The Blue Nile begins in the middle of the Abyssinian mountains at Lake Tana at 1700m above the sea.

It then arrives in Egypt from Wadi Halfa and up to Cairo, it traverses a fertile valley surrounded, to the west and east, by the Libyan and Arabian deserts.


From the heart of Africa to the Mediterranean Sea, the Nile is considered as the longest river in the world.

It meanders 6671 km through desert valleys, forests and farmland.

The River evokes Egypt, the famous land of pharaohs, but, paradoxically, by the time the Nile arrives at the Sudan-Egypt border, it has already completed more than 78% of its journey. 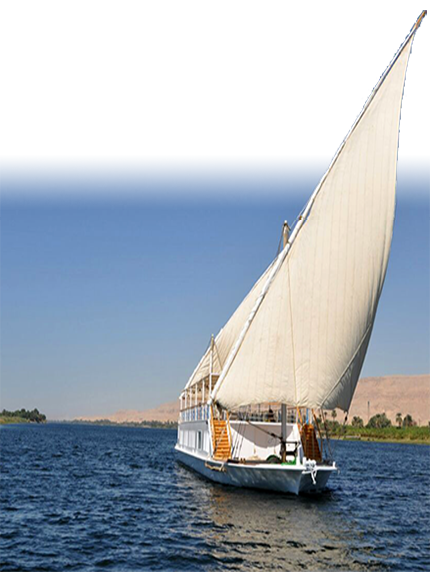